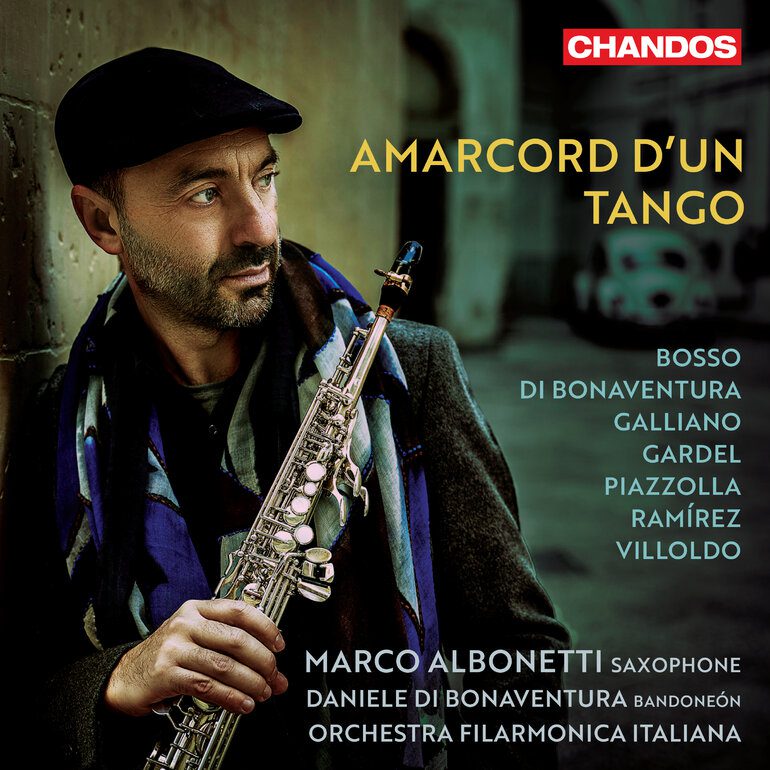 The following review is taken from the Summer 2022 issue of Clarinet & Saxophone magazine. For more reviews, news, and features from the single-reed world, join to receive our quarterly magazine and other membership benefits.

Soprano saxophone, the tango, lush strings and enough Latin American passion to feel the evening heat of Buenos Aires – there’s a lot to love about this new release on Chandos, entitled Amarcord d’un Tango (I remember a Tango). The majority of works are written, arranged or transcribed by the two soloists – Italian saxophonist Marco Albonetti and bandoneón player Daniele di Bonaventura – accompanied on most tracks by the Orchestra Filarmonica Italiana. The album pays homage to the tango through the years, from Astor Piazzolla and Carlos Gardel to contemporary composers Richard Galliano and Jorge Andrés Bosso, interspersed with several compositions from di Bonaventura himself. It features an arrangement of Ángel Villoldo’s El choclo, one of the earliest known examples of the tango, and the album’s three Piazzolla tracks are especially poignant with this year being the 30th anniversary of his death.

In the detailed sleeve notes, saxophonist Albonetti talks about how the project, in addition to being a brief journey through the tango, is ‘the joining of two instruments; the saxophone and the bandoneón, both of which were invented in the middle of the 19th century’. He continues, ‘The bandoneón, created as a more agile substitute for the organ in the world of sacred music in Germany, was brought by German immigrants to Buenos Aires, where it became central to the tango, music enlivened by rhythmic ideas from Africa and inextricably linked to dance. The saxophone … originated in Belgium, from where the instrument travelled to America where it discovered its promised land … [it] executes the mellow melodies of the tango with a lightness, a pliancy, and a tone that further intensify the feelings running through them.’

One thing that struck me was just how agile and virtuosic the bandoneón sounds in the expert hands of di Bonaventura. I must admit to not knowing the instrument particularly well in this kind of solo/chamber group setting, but the performance is incredible here. Who needs traditional piano accompaniment when bandoneón affords such a range of sounds and textures? Careful microphone placement ensures you can hear the air movement, the reeds, the keys – it’s alive and it’s talking to you. Considering both instruments are from the reed aerophone family, it’s also a great match for the soprano saxophone of Albonetti. Interestingly, he chose to use Légère synthetic reeds on the recording to more closely mimic the expression of the bandoneón, in terms of emission, sound and articulation. He also describes ‘playing with an “airy” staccato … conferring on the sound a unique “dirty” and nostalgic eff ect’. This attention to detail is a hallmark of the album, but I hear Albonetti’s rich soprano sound sparkling throughout, blending beautifully and sounding anything but airy or dirty.

There are many lovely moments throughout the recording. One highlight is Sanctus (track 3), written by di Bonaventura; a beautifully intimate and fluid duet for bandoneón and soprano sax based on the opening bassoon motif from Stravinsky’s The Rite of Spring, with just a hint of Por una cabeza halfway through the piece. Tango’s Gedanke (track 13) is the album’s closing piece, especially composed for the project in 2021. It opens with the sound world of arriving in a Bond villain’s lair; rich, dark strings playing ever-shifting, unsettled harmonies underneath a soaring, declamatory soprano sax. I love that for the last chord you hear the soprano sax holding just slightly longer than the strings. Deliberate or not, it reminds us who is the soloist here!

Amarcord d’un Tango is dark, moody, lush and up close and personal, with space for each solo instrument to really speak. Although their version of Por una cabeza lacks some of the intensity of the original, this is modern chamber music at its best, because as a listener, you can’t imagine the performers are reading any kind of sheet music due to the music flowing so fluidly and effortlessly. Highly recommended.