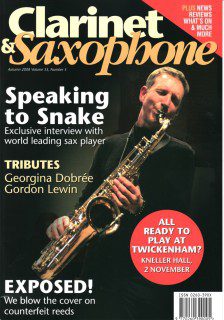 Jazz behind the curtain
The Iron Curtain perhaps? Michael Meadowcroft

Around the UK - Where can I play?
Kew, Darlington & Darwen

Clarinet and Saxophone Society of Great Britain, Notice of AGM
January 11th 2009 for this annual event